Are you a real millennial if you don’t have your own podcast? Well…I’m about to find out. Last week I launched Frenemy of the People, a podcast about journalism and trust. It includes conversations with reporters and editors about the work they do, plus broader discussions about “the media,” how readers/viewers/listeners relate to it, and vice versa. 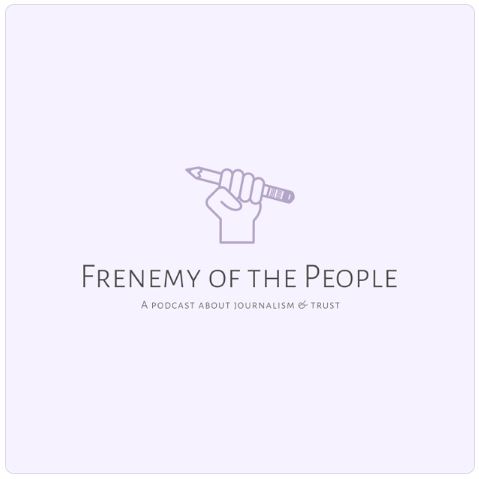 You can hear the teaser here now, and the first episode should be dropping tomorrow, October 1!

This was one of those projects that just kept tugging at me, even when I tried to convince myself that it wouldn’t be worth the time/potential blowback. But eventually I felt like I couldn’t not do it, so I did.

I’m still figuring out the whole audio production thing. Believe it or not a big part of my graduate program was focused on audio production, but back then I had access to much better software… which reminds me, if you like the podcast – or even just the idea of it – and want it to be even better, please consider contributing via Patreon.

When I was in journalism school, I read and heard from a lot of  journalists with a hunger to chase the biggest, most important, and most dangerous stories around the world. They chose the reporter path to get them overseas and into war zones, natural disasters and extreme events with their camera and notebook as quickly and as often as possible. Few of them seemed to do it for fame; they enjoyed the chase, the adrenaline rush, the feeling that their work was really doing something, really having an impact, telling stories no one else could tell.

That was never what drew me to the field. In fact, I would say I’m on the other end of the same field, playing a different game. I’m more of a “stick close to home, make some calls, meet people in coffee shops, ruminate on words for long thoughtful pieces” kind of journalist. But I’ve always been in awe of those who put themselves in harm’s way for a story.

And not just the reporters I see on TV or read in the paper, though Christiane Amanpour and Jeffrey Gettleman’s work had a huge impact on me as a budding journalist. The students in my classes in undergrad and grad school who clearly had the same ambitions impressed me as well. They were fidgety in their seats, pitching projects that required more bravery (or maybe sometimes hubris?) than I felt I could ever muster.

As I’ve watched these classmates and their colleagues travel to remote areas, enter war zones, report from protests amid bullets and tear gas, I find that more than admiration or reverence, I’m overwhelmed with a sense of gratitude. I’m thankful to them for telling the stories I know I wouldn’t be able to tell, and so few are willing to try.

Lately, that gratitude has been tinged with sorrow, as I have realized the true realities of having the courage and dedication to go to Africa, Syria, Egypt, Iraq, Turkey, Israel, Pakistan and other far-flung places in search of the truth.

James Foley is only the latest  reporter to be murdered for doing his job in an area where so few others are willing to go. His story, one of kidnapping, disappearance, then horrific beheading on video, is both an individual tragedy and a broader message to the media industry and all those who consume what it produces: the majority of those who are willing risk their lives to tell the stories of war and unrest do so with little to no support.

The journalists who write much of what we read about war, famine, death and destruction don’t do so from cushy hotel rooms paid for by deep-pocketed publishers. Many of them aren’t even sure a paycheck will be waiting for them when they document what they’ve seen.

Like most of the journalists in Syria right now, Both Foley and Steven Sotloff – the American journalist whose life was also threatened in the video of Foley’s beheading – were freelancers.

Though I don’t know the specifics of Foley or Sotloff’s situations, that often means no institutional support, no insurance, no money to live on and no guarantee of a paycheck.

According to the Committee to Protect Journalists, in Syria alone 69 reporters have been killed over the last two years, 80 have been kidnapped and about 20 are currently missing.

Here is an illustrative explanation of the conditions in which many of these journalists were working, from a piece by Francesca Borri, an Italian journalist, that ran last year in Columbia Journalism Review:

People have this romantic image of the freelancer as a journalist who’s exchanged the certainty of a regular salary for the freedom to cover the stories she is most fascinated by. But we aren’t free at all; it’s just the opposite. The truth is that the only job opportunity I have today is staying in Syria, where nobody else wants to stay. And it’s not even Aleppo, to be precise; it’s the frontline. Because the editors back in Italy only ask us for the blood, the bang-bang. I write about the Islamists and their network of social services, the roots of their power—a piece that is definitely more complex to build than a frontline piece. I strive to explain, not just to move, to touch, and I am answered with: “What’s this? Six thousand words and nobody died?”

Actually, I should have realized it that time my editor asked me for a piece on Gaza, because Gaza, as usual, was being bombed. I got this email: “You know Gaza by heart,” he wrote. “Who cares if you are in Aleppo?” Exactly. The truth is, I ended up in Syria because I saw the photographs in Time by Alessio Romenzi, who was smuggled into Homs through the water pipes when nobody was yet aware of the existence of Homs. I saw his shots while I was listening to Radiohead—those eyes, staring at me; the eyes of people being killed by Assad’s army, one by one, and nobody had even heard of a place called Homs. A vise clamped around my conscience, and I had to go to Syria immediately.

But whether you’re writing from Aleppo or Gaza or Rome, the editors see no difference. You are paid the same: $70 per piece. Even in places like Syria, where prices triple because of rampant speculation. So, for example, sleeping in this rebel base, under mortar fire, on a mattress on the ground, with yellow water that gave me typhoid, costs $50 per night; a car costs $250 per day. So you end up maximizing, rather than minimizing, the risks. Not only can you not afford insurance—it’s almost $1,000 a month—but you cannot afford a fixer or a translator. You find yourself alone in the unknown. The editors are well aware that $70 a piece pushes you to save on everything. They know, too, that if you happen to be seriously wounded, there is a temptation to hope not to survive, because you cannot afford to be wounded. But they buy your article anyway, even if they would never buy the Nike soccer ball handmade by a Pakistani child.

The excuses for this are myriad, but with every new capture and death of a journalist it becomes more clear that something needs to change. Yes, good reporting is expensive. Yes, good reporting from the heart of a dangerous conflict is more expensive, and it should be, and those who choose to do that reporting should be valued not superficially – $70 here and $70 there but “thanks for all the pageviews!” – but fundamentally, with salaries and insurance and support from both publication and government. They should be valued both for their work and their humanity, which they literally put at stake to tell the world’s most wrenching stories.

Borri is still alive, and free, currently reporting from Gaza. I wonder how much her stories of the death and destruction there are worth to her editors now, a year since her CJR story? How much were Foley’s and Sotloff’s pieces worth to those who published them? How much is this kind of reporting worth to you?

Update (9/2/14) — Various news outlets are reporting that Steven Sotloff has also been beheaded by ISIS. Here’s a great story the NY Times published on Aug. 22 about how Sotloff was “undeterred by the risks of the job.”

I’m Kaitlin, and I write about technology, health, and social science.

More about this blog here.